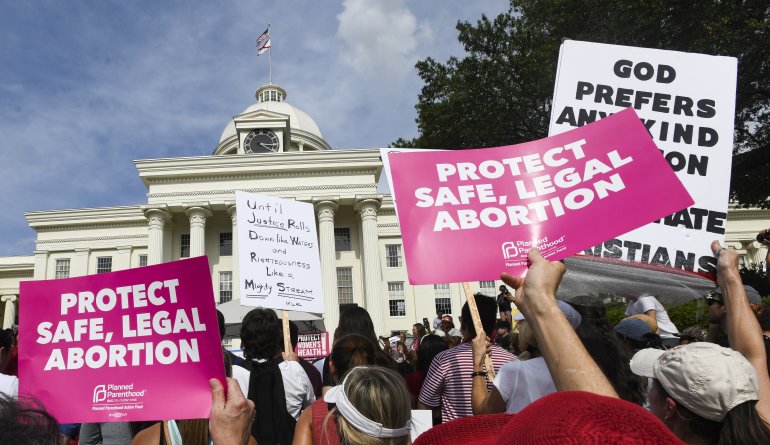 The judiciary and legislative basics, explained.

Several states have recently either drafted, passed, or signed Anti-Choice legislation into law. These are policies that restrict and/or outright ban a person with a uterus’ ability to access a safe and legal abortion.

If you’re thinking, “That sounds unconstitutional!” — you’re not wrong.

Roe v. Wade was a landmark case by the United States Supreme Court which held that the right to an abortion is protected by the constitutional right to privacy. That was in 1973. Prior to that ruling, abortion was illegal in the United States.

Later, other Supreme Court decisions, such as Planned Parenthood v. Casey (1992) reaffirmed Roe v. Wade and stated that any policies/laws that place “undue burden” on a woman seeking an abortion are likewise unconstitutional.

Are the state laws restricting abortions in Alabama, Missouri, Ohio, and Georgia unconstitutional?

The short answer is yes.

As we write this, legal challenges are being filed in the U.S. district courts of these states, which will likely delay any implementation of these new laws. However, that is the goal of the Anti-Choice legislators who drafted them.

Even though it is likely that the lower courts will deem these laws unconstitutional, the losing side will appeal to the U.S. circuit court, and then to the U.S. Supreme Court.

United States law operates with federal legislators (Congress people and senators) and state legislators. Federal laws apply nationwide while state laws are only applicable in their state. Federal laws override state laws. However, states can attempt to pass laws that restrict or modify federal laws — to varying levels of effectiveness.

Laws are passed at either the state or federal level. If their content is challenged, they can travel up the courts — if a law reaches the US Supreme Court for review, their ruling is final.

The latest wave of Anti-Choice legislation doesn’t just criminalize abortion, but also proposes the most severe penalties against not only people who seek an abortion in these states, but for the physicians who would potentially carry out the procedure.

How can they do that?

These laws were drafted to provoke legal challenges and make their way to the U.S. Supreme Court for review, with the hope of overturning access to safe and legal abortion.

The Supreme Court is made up of nine justices who serve for life. With the recent confirmation of Brett M. Kavanaugh, the court is now made up of a conservative-leaning majority (five to four). With the odds tipped, there’s a fear that long-standing federal protections of abortion could be reconsidered.

So how in danger is Roe v. Wade… actually?

It’s hard to tell for sure. The Supreme Court usually operates on precedent, and thankfully for us, tries to avoid rushing to overturn a long-standing ruling.

Efforts to limit and restrict safe access to abortion are not new. Pro- Choice advocates have been fighting for years against numerous state laws that sought to make it harder for people to obtain abortion procedures.

Nonetheless, there is legitimate concern that these recent (very) aggressive tactics combined with a more conservative Supreme Court may put Roe v. Wade in serious jeopardy.

It will depend upon the content of the opinion (which lays out the specifics for a ruling) from the Supreme Court, but if they overturn Roe v. Wade in its entirety, abortion could very well become illegal in the United States.

Is the recent legislation in Alabama, Missouri, Ohio, and Georgia currently being enforced?

No. In most cases, Pro-Choice groups will have mobilized quickly to file law suits to stop their implementation.

What can I do to fight this?

While you may not be involved in government, there are ways you can help combat these recent infringements on human rights.

Some nationwide organizations fighting for reproductive rights include the ACLU and Planned Parenthood. Additionally, the National Network of Abortion Funds services over 38 states, with an emphasis on eliminating economic barriers to marginalized and low-income individuals in need of abortions. Cut them a check!

Cisgender women are not the only ones affected by these laws.

For tips on how to make your conversations surrounding reproductive rights less cis-centric, click here.

If you can’t afford to donate funds, consider donating your time…

Photos (in order of appearance) by Julie Bennett (via Getty), Sophie Kubinyi, and Alida Bea.