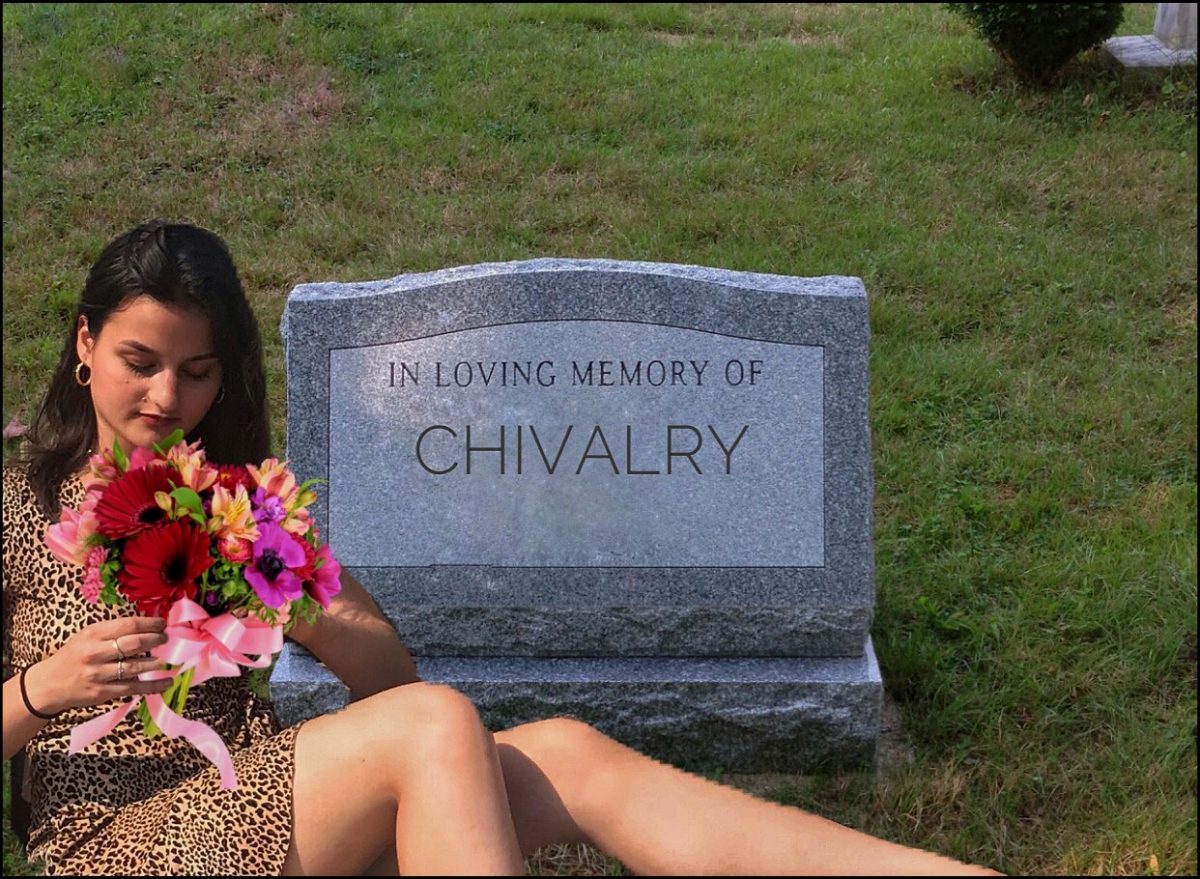 One night, a fateful one that is, I began lamenting over my history of dating experiences, as I do every so often when I’m in the mood for a self-inflicted emotional rollercoaster. Most were good, some were bad, and some were so unworthy of recognition I struggled to recall them. Picking away at the crusty scabs of my love life I unravelled, to my surprise, minimal-to-no chivalry. This frustrated me, evidently, as here I am aggressively puncturing my keyboard in distress.

WHERE DID CHIVALRY GO?

Is it doomed, six-feet under in a sealed coffin? Would it be absolutely, utterly, and undeniably incomprehensible of me to ask to be wooed in a quintessentially romantic way? You know, whisked away on a horse carriage by a man who, ever-so-smoothly, lodges a rose stem between his teeth while somehow still being able to whisper sweet nothings into my ear? I’m not asking for too much am I? (. . . don’t answer, it’s a rhetorical question.)

As I awingly replay movie scenes of knights in shining armor protecting their women at all costs, going above and beyond to ensure their utmost safety and comfort, a pestering feeling of guilt brews inside me.

Am I — a self-proclaimed warrioress spouting chants of equality — in a position to demand such courteous, self-less, savior-like behavior from a man? I’m not, clearly, if I am an independent woman and the motive behind chivalry comes from the placement of women on a pedestal, RIGHT?

WRONG! Ish. Wrong-ish. No… but yes. Okay, let me explain.

Does the age-old saying of “if it’s too good to be true, it probably is” ring a bell? Well lo and behold, gentle reader, chivalry is no exception! A simple Google search reveals that chivalry is, essentially, sexism — benevolent sexism that is.

Now, I know what this looks like. Here she goes again, a man-hating feminist in her prime, storming her way through the world ready to shred the remaining good things in life to bits — but hear me out.

I likewise initially thought feminism was going too far when it began scrutinizing men’s harmless acts, such as them opening doors for us or pulling out our chair (“UmMm I cAn Do ThAt MySeLf ThAnK yOu VeRy MuCh”). Were we so desperate to seek out faults in male behavior for the sake of feeling oppressed, handpicking instances in life to feed our victim mentality? I considered this angle, as well. But things are often far more complex and multi-faceted than they initially appear, as I will come to unpack here.

Benevolent sexism — unlike the hostile sexism we can inarguably label as being unjust — stereotypes women as affectionate, delicate, sensitive, and in need of protection and provision.

The bewildering paradox of benevolently sexist behavior is that, instead of despising it for underhandedly promoting the idea that we’re weak and incapable of taking care of ourselves, women often seek it. Exhibit A: me.

A recent study published in the Personality and Social Psychology Bulletin revealed that women, irrespective of whether they identified themselves high or low on the feminist scale, were attracted to benevolently sexist behavior. What’s more is that, although these women understood that a chivalrous man would potentially come at the expense of their independence being dismissed, they still sought out these behaviors.

Perhaps I’m not the only one struggling to wrap my head around this existential crisis-inducing catch-22? You may wonder why, despite its shortcomings, chivalrous (benevolently sexist) behavior is still attractive to women. There’s a variety of reasons, the most obvious being that we perceive these actions as something a nice, decent human being would do! They’re viewed as being nothing more than acts of prosocial behavior, and most of the time, that’s precisely what they are. I highly doubt that a man offering a helping hand to a woman carrying heavy luggage does so with  malicious intent.

The other (much more thrilling) reason emerges from an evolutionary and copulatory standpoint. Let’s plunge — head first 😉 — into some Mating 101.

One of my favorite papers on this topic is by David M. Buss, wherein he postulates the undeniable truth about sex: women bear far larger consequences for having sex than men do (think internal female fertilization, pregnancy, lactation). So, the costs of making poor sexual decisions are much graver for women than they are for men. As such, women would ideally be choosing a mate of high value. When a man displays acts of benevolent sexism, it alludes to the idea that they are willing to commit to, protect, and invest in us and our potential future offspring. Which, in prehistoric times, was crucial — given the many surrounding predators and our physical weakness during (and after) pregnancy.

Now let’s say that you, as the strong, empowered, capable woman that you are, decide to — just like I have — submit to your primitive yearning for chivalry. “What are the consequences?” you might ask. Well, apparently “plenty” is the answer.

In the unlikely event that you think I’m full of shit, I have even more research (that’s guaranteed to spiral you into an even deeper identity crisis) to back up my claims!

Benevolent sexism is bound to affect women’s internal thought processes as claimed by a plethora of research articles. Women holding benevolently sexist beliefs are less ambitious education and career-wise, likely to depend on their future husband for financial support, and more prone to self-objectification. Agonizingly for me, however, these women also self-report greater life satisfaction.

To further rub salt to your (and my very own) gaping wound, Glick & Fiske’s theory on the subject states that we often rely on benevolent sexism to protect us against other men’s hostile sexism. This is especially the case in highly sexist societies, where sexism is both the threat and the solution. Although, naturally, there’s a pitfall.

It isn’t all women that benefit from benevolent sexism. According to one study, only women who abide by traditional gender roles (e.g. housewives) do so, while those going against these gender norms (e.g. sexually promiscuous women, queer women, etc.) are treated with the healthy, standard dose of hostile sexism.

All that glitters (more like faintly glimmers in this case) isn’t gold, however; by using one form of sexism as a guard against another form of sexism, we perpetuate our own disadvantage in society. Fuck me, right? We can’t seem to win.

So ladies, given this likely uncalled for amount of information, what will it be? Are we to succumb to chivalry and seek it out for personal satisfaction, or restrain ourselves for the greater good? Savor the blue pill, or gulp down the red pill?

All photos provided by Derya Yildirim.